The fundamental axis of this work addresses the complexity of the notion of border in the present and, more specifically, the manipulation of the concept of identity and difference. It questions the justification of all types of theories based on these concepts.

The variation of the sense of identity from the new technologies enhances a reality in which borders are permeable – even if they are only in terms of the position held in relation to the knowledge-power axis. There is talk of transnational identities that are based on access to information through the Internet, on the economy of inter-national means of transport -for a certain spectrum of the population- and on the establishment of common cultural references through the media (cinema, advertising, etc.). But simultaneously, an exclusive notion of identity that uses new technologies to reinforce borders and preserve privileges resurges with increasing popularity.

Different interpretations of identity that find their connection in information and data management technologies, whether in access to the Internet, whether in the biometry systems installed at borders, or in the management of flows of migrants, either in the communication of these realities through the media. A technological reality that simultaneously has driven to an unusual level an activity that historically is also strongly connected to the notion of identity; writing. Technology relies on languages ​​we do not know beyond its surface and begins to produce its own writing autonomously. At the same time, the daily use of different apps is exponentially triggering the volume of texts written daily by most citizens of the world. A paradoxical use, since the writing, the language, the corresponding writing system; it is something that historically has strengthened the social identity of a group based on difference versus another.

The works of this project play with these perspectives, highlighting the contradictions implicit in the crossing of realities that occurs in the difference.

I place my own artistic practice in a border space in which collaboration with artists from other environments has become indispensable.

On a material level, the fundamental axis of the proposal is a construction of different translucent screens dividing the exhibition space. In them, the identity / difference duality is re-written in more than 100 languages, more than ten alphabets from the most widely used translation app on the internet.

In these panels an automated water flow is applied by means of nebulizers. In such a way that the words are progressively erased. By keeping the flow of water in a closed circuit, while the words disappear, the water that comes out of the nebulizers acquires the color of the paint. 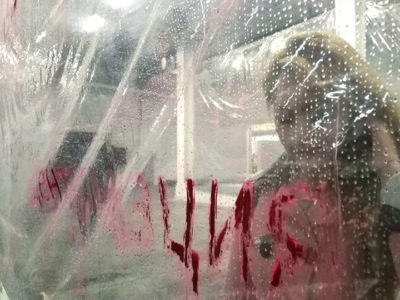